How To Do a Band Pull Apart, Standing Band Row, and Face Pull

Here I’m going to demonstrate three of my favorite pulling exercises, the first is a band pull apart. Band pull aparts seems really simple, but there are a couple tips and tricks you can use to make it more effective. I actually like to start with my back up against a post or doorway or corner and run that right along my spine. I also find it helpful because a lot of times when people are doing a band pull apart, they will pull the band apart and will bring their sternum to their band, instead of the band to their sternum. So they’ll hyperextend their spine and their ribs will flare.

So I like to put my back up against a post, and then I actually like to step my feet out and tuck my pelvis under a little bit. I pull my rib cage towards my pelvis and keep it flat against the post. Put your arms out in front of you.  For your hand position  you can do palm up which I prefer as I find it a little bit easier to not engage my upper traps too much. But you can also do palm down if you’d like. You can use one strand, which is a little bit easier, or you can do two strands which is a little bit harder. And of course you can always get a thicker band if there’s not enough tension. I like to put my arms out in front of me, pull the band apart and squeeze the post with my upper back. Come back together, pull it apart, squeeze the post with my upper back. I tend to prefer my arms out in front of me a little bit with my arms bent. But some people like their arms, their elbows right above their side. I can’t even really do that one but some people feel that one more in their upper back. They keep their elbows glued to their side and pull the band apart this way. You might feel a little bit behind in the back of your arms that’s fine but primarily you’ll feel it in your upper back. So that’s the band pull apart.

Another one of my favorite rowing variations with the band is the standing band row. You’re going to grab a band, get in a nice athletic position.  You don’t want to have your knees locked out because then when the band puts any tension on you it’s going to pull you forward. So get in a nice athletic position, and then you’re going to pull your elbows right back by your body. Most importantly here, of course ribs down, but we don’t want the elbow to go too far behind the shoulder, that puts the shoulder in a poor position. So you only want to row back as far as you can row, keeping your elbow in line with your shoulder. For some people who can’t retract their scapula, they’re not going to be able to row back very far. They might only be able to get back to here. For someone who can pull their scapula together, I can pull back to there. So standing band row, you’re here, pull back, squeeze your back together, let it come apart, squeeze it together, let it come apart.

Another version of the standing band row is what I call a face pull. I actually think everyone calls it a face pull, so it’s not just me. You can do it with a band, or you can do it with a cable machine but  I’m going to demonstrate here with a band.  Again same athletic position, you’re going to pull the band towards your face and you’re going to flare your elbows a little bit, but just keep your ribs down and in a good position. Pull it right towards your face, you can go higher or you can go a little bit lower. Or you can also just do a different variation, the standing band row and pull down. Most importantly again, that the elbow and shoulder are in a good position, that your ribs are down and your body is nice and tight. So that’s the band pull apart. A standing band row, a face pull at a couple different levels. Those are some pulling variations that I like. 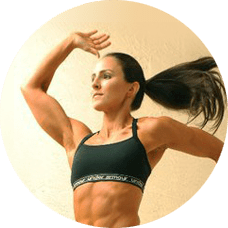