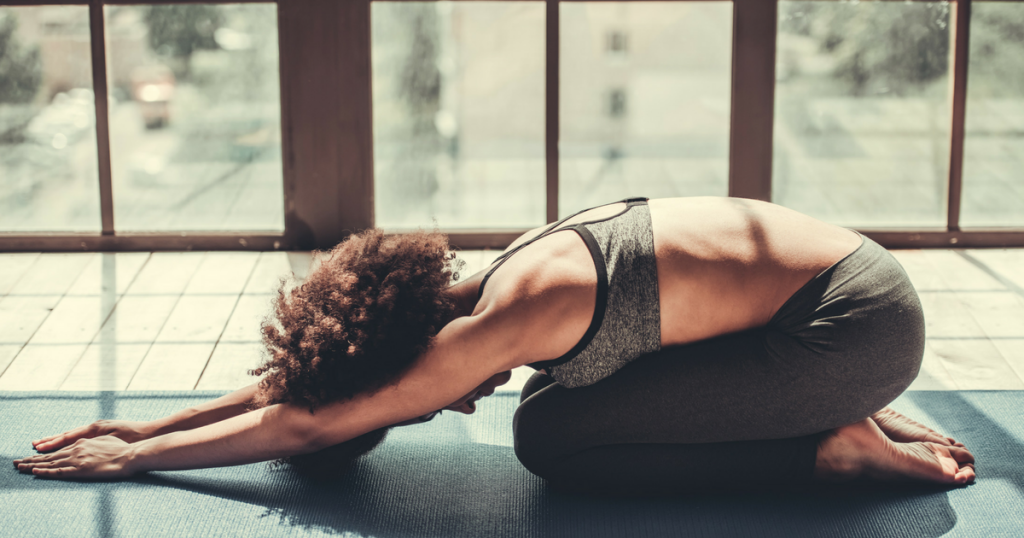 Fitness has always been important to me. I am the middle child and only girl between two boys who were competitive athletes. Growing up, I was very athletic, although I never competed in any sports until much later in life. 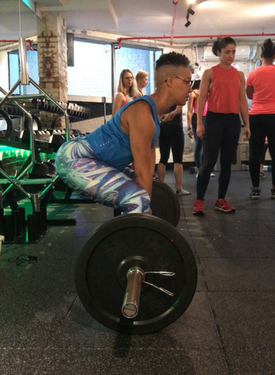 I was an avid lifter in college, at a time where aerobics were quite popular. While I chose to complete a degree in social work, I still enjoyed fitness and hoped to pursue it in some way.

Working out was also one of my tools to cope with depression and anxiety. Not only did it help me tremendously, but it inspired me to find a way for others to experience this same freedom I was feeling through fitness.

The question for me then was what I would do, specifically. It wouldn’t be until several years later — and two kids — that I would find my fitness calling.

How I Found Pilates

I was first introduced to Pilates — a system of exercises which puts emphasis on alignment, breathing, developing a strong core, and improving coordination and balance — in 2006. A friend of mine, who was convinced I’d love it, invited me to attend a class taught by Cynthia Shipley, a Romana’s Pilates certified instructor who also happened to be my daughter’s ballet teacher at Harlem School of the Arts.

I had never even heard of Pilates before, but considering that I was already physically strong from weight training, and that I was also taking a ballet class — despite the fact that it left me with pain in my left hip, which was diagnosed by my chiropractor as the result of a muscular imbalance — I figured Pilates would be easy.

My first Pilates class was the most difficult class I had ever taken, but I felt stronger, more flexible, and more mobile afterwards.

My chiropractor strongly suggested that I continue taking classes and, after a few weeks, my body changed and I no longer experienced pain in my hip. I kept attending class twice per week and, with encouragement from Cynthia Shipley, I decided to pursue a certification in Pilates. 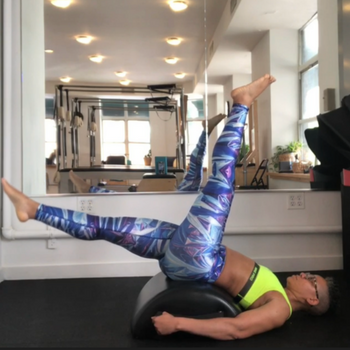 In 2007, I received my Pilates Mat certification and, later in 2008, I became comprehensively certified on the equipment, both from Core Pilates NYC. I was ready to go and excited to change lives, particularly in my community of Harlem. I wondered why my Black community did not know about Pilates and its benefits, and was committed to becoming an example I had rarely seen.

For five years, I taught two weekly Pilates mat classes attended mainly by Black women. It later dawned on me that although my students had the luxury of having a Black woman as a Pilates teacher, I had rarely met other Black women who taught Pilates. My teacher, Ms. Shipley, was a Black woman. I was one of two Black women in my certification class of 12. In my first two years of teaching, I had only met four Black female instructors.

From Underrepresentation to Organization

As a Black woman, it had become “normal” to not see me represented in fitness or anything else for that matter. Even amongst the many fitness networks, events, gyms and studios that I attended, Black females were few in numbers. This eventually inspired me to write the article Let’s Talk About Black Female Representation in Fitness.

This, however, has been going on forever, beyond the fitness sphere. For decades, America has allowed underrepresentation, white supremacy and white privilege to permeate every aspect of our lives. After a while, it seemed “normal” to see or participate in mostly white spaces. 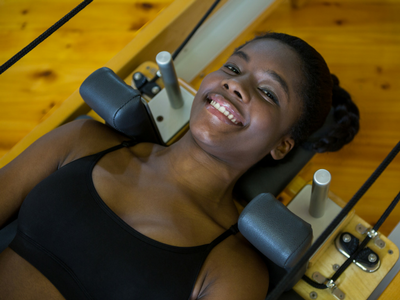 The idea to create a new space began back in 2010. This group, which I initially named Pilates Instructors of Color, was led by choreographer, lecturer and Pilates teacher Dyane Harvey-Salaam. However, given our busy schedules, it became difficult to meet consistently and the group eventually fell off.

The good thing was that I had met a few other Black women who were Pilates instructors. Still, as I continued to teach, it was still a rarity to meet very many of us. I looked at all the major Pilates platforms and rarely if ever saw representation of the amazing women whom I had met in this group.

I still felt there had to more Black women out there teaching Pilates. One of the “Elders of Pilates” — the original students of Joseph Pilates who then went on to become instructors themselves — was a Black woman named Kathy Stanford Grant. I thought that her presence had surely influenced the Black community, and that therefore there had to be even more Black female instructors as a result.

I went through an 8-month period of doubt and depression from the fall of 2016 to the spring of 2017. Since I had not seen very many Black instructors, I felt it was my purpose to be the pioneer of Pilates in my community of Harlem. At the same time, part of me felt I was just spinning my wheels. I was doubting my ability as a Pilates Instructor and wondered if I was really meant to teach. 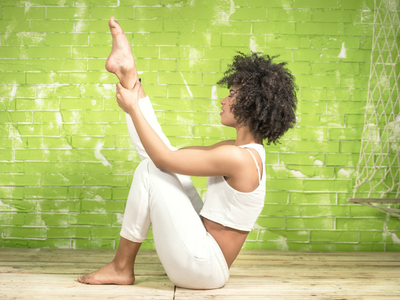 Was I really going to change my community’s lives? Was I going to die with an unfulfilled purpose? I had an awesome support system of friends and family who encouraged me to remain persistent, yet my tearful prayer to God was to show me what I was to do next.

So many events happening in our nation were centered around white privilege, white supremacy and racism, as well as the systematic underrepresentation of people of color. I was angry at myself for allowing this “normalcy” to continue even though I saw it and knew it was happening. I was also saddened that given the increasingly outspoken nature of white supremacy in America, as well as the murders of innocent Black men, women and children, White America still seemed to want a status quo. I certainly didn’t want a status quo so I asked myself what was I going to do about it.

I consulted with my friend Catrice Jackson, Founder of SHE Talks | WE Talk, a deep, honest and truthful dive in the issues of race, racism, whiteness, white supremacy and intersectionality. Her encouragement helped renew my passion for bringing Pilates to my Black community and was the catapult to create Black Girl Pilates in May 2017.

The Creation of Black Girl Pilates 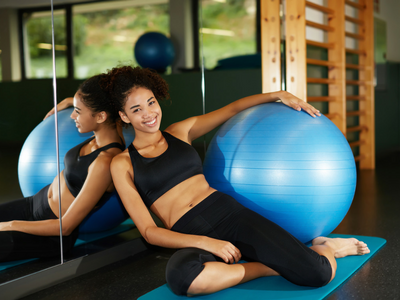 After collecting almost 50 instructor names with the help of some Instagram friends, I set up a Facebook instructor support group and added the women I already knew. We needed a space to rejuvenate, discuss successes, difficulties and sometimes racist microaggressions: Black Girl Pilates was born! After much thought, I wrote the following mission statement:

Black Girl Pilates (BGPi) is a space for Black/Afro Latina women who teach Pilates to share ideas, successes and struggles as instructors and teachers within the business of the method. We will also identify and dismantle areas where we are left out, i.e. magazines, social media, conferences, trainings etc., and confront those entities regarding the lack of Black women in these spaces.

I, as the founder, took it on to specifically address platforms that had little representation and open a discussion as to why there was none: I had enough women to fill a magazine, a studio, a conference and anything else they needed — there was no excuse as to why these organizations should not have Black representation! 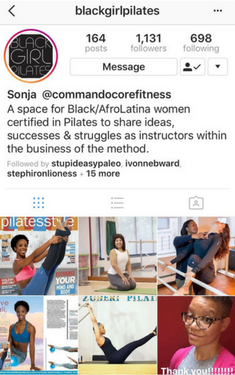 I also knew that our Black communities, who thought Pilates was specifically for white women, needed to see us. We would be bringing Pilates to them.

Currently, the BGPi support group has 150 members representing 6 countries. At the publishing of this article, we will have had our first official Black Girl Pilates instructor meet up in New York City. We currently have an Instagram feature page with over 1000 followers and plan to add a Facebook page, website and blog in the very near future.

Of course, the creation of BGPi didn’t go without its challenges. After my Girls Gone Strong article was published, more people became aware of Black Girl Pilates, and I received some backlash: I was called a “racist” because I had a group specifically for Black women who teach Pilates, and a post was written in a Pilates forum questioning the validity of the BGPi group, stating we were “separatists and the founder of this group needed to have her head checked.” Despite these negative instances, we have many more people who love that we exist and have personally sent Black female instructors to the group.

I had finally found my sisters who had similar experiences as me and needed support and mentorship from other Black women who teach Pilates.

From a physical strength standpoint, Pilates has been my go-to exercise when I could do nothing else. Whether I was depressed or recovering from lifting injuries, Pilates was my meditation and sanctuary.

Just as Girls Gone Strong is a platform that encourages women to be the strongest you they can be, because strength comes in all shapes, sizes, races, ethnicities and is non-gender conforming, Pilates was my catalyst of strength to create Black Girl Pilates.

It gave me the courage to write articles speaking out against underrepresentation, white supremacy and white privilege in the fitness industry, be open about my battles with depression/anxiety, encourage body positivity and be a proud example to my Black community that Pilates is for us and taught by us.

When I dare to be powerful, to use my strength in the service of my vision, then it becomes less and less important whether I am afraid. — Audre Lorde 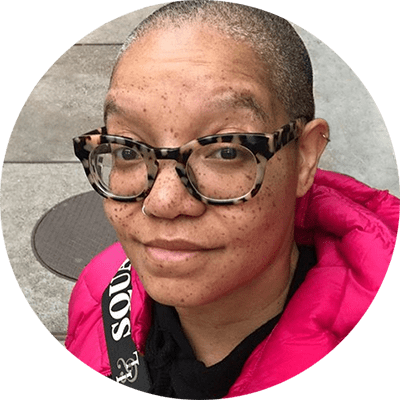