My Journey from Figure to Powerlifting 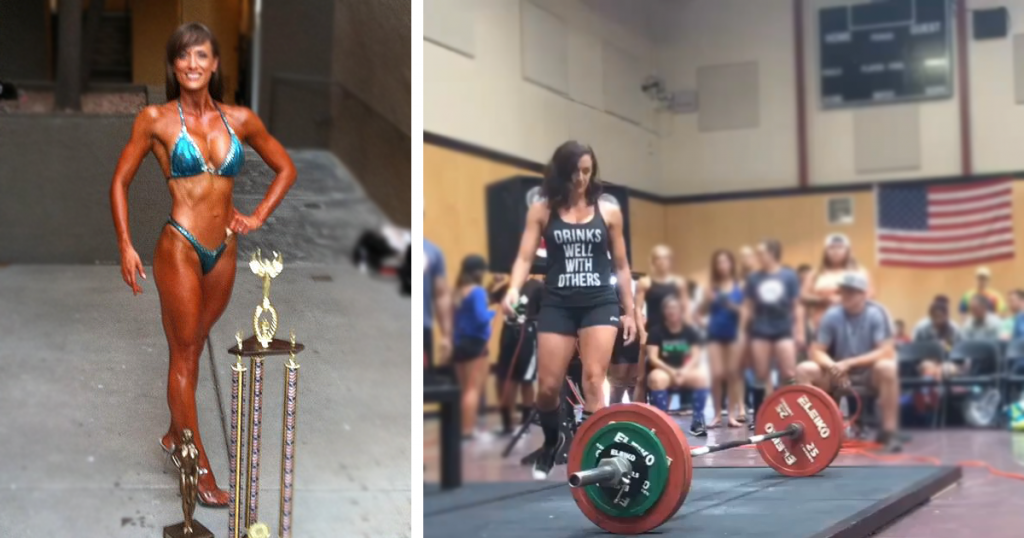 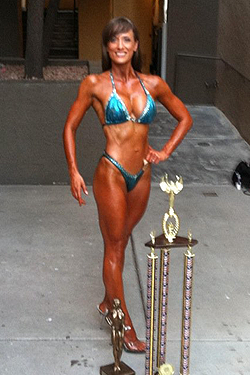 That’s what I told my then coach Alan Aragon, during a pre-show pep talk as we went over my game plan for the week leading up to what would, in fact, be my final show.

In the past year, I had switched from NPC figure competitions to drug tested shows. I won overall in my previous show, and carried home a ridiculous, waist-high trophy to merit my efforts. Despite winning my class and overall, I questioned the judges’ decisions. On the ride home I measured myself against the other women and found a multitude of reasons ‘she’ should have won—not me.

That’s how it always was. No matter how I placed in a figure competition, it never boded well with me. Subjective judging is just that: you don’t know who is sitting at the table, how they’re feeling that day, how many bodies they’ve scanned over prior to seeing you on stage, or whether they have something against blue posing suits. As a competitor you just never get a clear understanding as to why you placed or didn’t place.

Hanging Up My Heels

This show was my first OCB pro qualifier and the first competition my kids attended. I know I brought my best package to date. My suit was gorgeous, my posing on point, and my body was more symmetrical than it had been in previous shows. 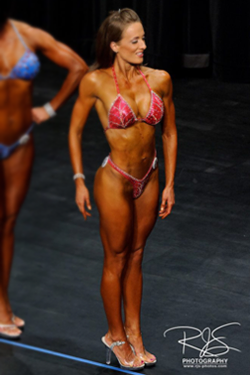 The judges called out fifth in my class, then fourth. I heard my name. I accepted my placement with grace and poise, but my belly wrenched.

It wasn’t that this was my final show. It wasn’t that I felt I deserved better placing. My gut tightened and twisted at the thought of what my family sacrificed to see this moment. And for what reason? Why was I doing this?

I’d walked into the theater that morning with a clear vision of my competitive future. I didn’t want one, but was afraid to admit that this wasn’t right for me.

During those last two months I spent more time in six-inch plastic heels and bikinis than any other clothes. The dozens of practice photos and videos, the polished poses, smiles, and waves. The hair and make-up run-throughs, the back and forth emails with the suit designer and my coach, the food prep, the photo shoots, and the hours in the gym.

There my kids sat, with the clock ticking close to midnight, exhausted, but smiling for their mom. This wasn’t what I wanted. Saturday nights with my family should be spent riding bikes to the park or barbequing with friends. Yet, there they sat, in an audience of hundreds, watching men and women flex in swimwear.

Feeding the Competitor Within

After that pivotal moment I thought long and hard about the why.

Why was I doing this?

Growing up an avid athlete I realized that innate competitive drive still resided within my soul. It was clawing at my insides, so I constantly sought ways to feed it.

That inner athlete was my why.

With a solid grasp on my why, in 2012 I sold my suits and tossed my plastic heels for good, but I needed to figure out a new what. I toyed with the idea of joining a track and field team, but the training hours didn’t work with my schedule.

Triathlons crossed my mind, except that a nagging fear of drowning kept me out of the lakes. I spun my wheels, aimlessly forging through workouts for two years.

Stepping Onto the Powerlifting Platform

It wasn’t until 2014 that I committed to a new athletic venture: powerlifting.

By nature I am fast, agile, and more of a skills than a power athlete. Growing up, I was that knobby-kneed kid who held records for most stolen bases and pitching no-hitters. I began lifting weights several years prior, so I was stronger than average.

However, I was by no means “powerlifter strong.”

That’s the beauty of the sport, though. No one steps onto the platform to beat anyone but herself.

We show up to be bigger, stronger, and a more technically sound lifter than we did before our training cycle began.

I knew I had my work cut out for me, as I had only focused on aesthetics in my previous training. I toyed around with heavy lifting, but really, I was clueless when it came to true one-rep max lifts, training cycles for strength, and all the technicalities of powerlifting.

No longer would I focus on bringing up lagging parts through loads of accessory lifts, nor would I follow moderate to high rep schemes. I didn’t need to end each session with a bout on the treadmill.

I began with the one thing I was clear on—choosing a meet. I signed up for the Southern Powerlifting Federation (SPF) meet on June 1, 2014 at Super Training, Mark Bell’s gym in Sacramento. After registering, I contacted Jim McDonald of Super Training and he graciously invited me to come train with them during open gym hours.

My skin flushed with goose bumps, and then I felt queasy at the thought of training with actual powerlifters in a world-renowned gym. I reverted back to the idea of training alone in my cozy garage gym with whatever equipment was available.

Two months into my training I realized that the only way I would get stronger is with coaching. I reached out to Jordan Syatt of Syatt Fitness and began a training cycle at nine weeks out.

He evaluated my form, gave me tips on technique, and pushed me to get better every week. I also worked with Cara Westin of FN Strong in Sacramento to improve my bench and squat technique.

One of the largest hurdles I had to overcome was eating a caloric surplus. My brain had gotten used to eating like a figure competitor despite being off the stage for two years. 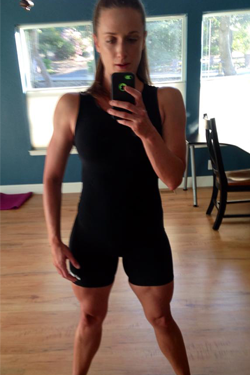 Both Jordan and my mentor Bret Contreras told me to “just feed your hunger.” This was a huge mental shift. as previously I trained my brain and body to suppress the hunger until it passed. Hunger was a sign that my body was doing what it was supposed to do—drop fat.

Now I was being told to feed into it and to eat more food that I ever imagined possible. I was up ten pounds in eight weeks by the time I weighed in, but I looked better than ever.

At weigh-ins, the day before the meet, some of the most recognizable faces in powerlifting filled the room, and I began to get a sense of this community. Though they were all competing the next day, these guys wanted nothing more than to grab a burger and beer together and catch up on life.

The next morning I showed up with a goal in mind: have fun and don’t finish dead last. Women were there to break world records, and it never once crossed my mind that I was competing against them, regardless of our weight classes. We were lifting on the same platform.

I wasn’t fighting for a place on the podium.

I was there to watch incredible feats of strength, these women grinding through lifts they likely thought impossible at some point. I was there to be inspired, to make friends, and to see what I was made of.

The energy in the room was electric. Whether it was a world-class athlete or first-time competitor on the platform, the audience cheered for the lifter to push through.

I’ve since moved onto other sports, but I adopted methods and techniques from both the bodybuilding and powerlifting world that I apply in my everyday training today. 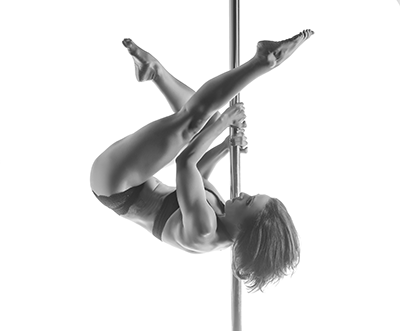 I learned how to run through training cycles, whether my goal was to get stronger or to grow bigger. Above all, I now have a greater appreciation for what it means to do the impossible. It’s not about anyone else in that room but me. I’m not besting anyone’s records or sizing up to their physiques. I pushing my own body, striving to do better, grow stronger, and forge ahead on my own journey.

Powerlifting provided a greater understanding of what my body is capable of doing. Even though I have no desire to get back on stage, if I did, I know that I would have a completely different mindset now because of my experience on the platform. I would put on my blinders and walk that stage like I was the only one in the room. 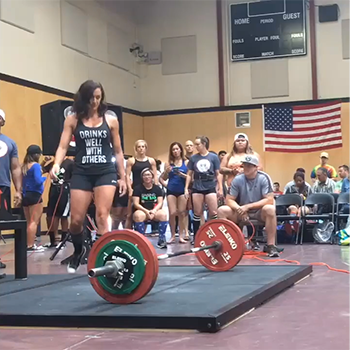 This past September after taking a six-month hiatus from heavy lifting I competed in a local deadlift-only competition. I ran through an eight-week training cycle lifting only twice a week and broke my own previous record.

I walked onto that platform with more confidence than ever simply because I set aside my competitive mindset, relaxed through the process, and showed up to have fun.

I trained for this meet while playing softball and taking several hours a week of pole fitness. It wasn’t my end-all-be-all in fitness—just an added component to what I was already doing.

One of the greatest lessons I’ve learned in my journey from the stage to the platform, and beyond, is that unless a competition is paying my bills, the only reason to do it is to have a good time and enjoy a good personal challenge. 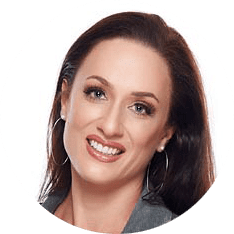 About the author:  Kellie Hart Davis

Kellie Hart Davis is the founder of FitThrive.com, a site dedicated to improving the lives of women with online fitness programs and communities, private coaching, and free workouts. She is the co-founder of Get Glutes, a women's online strength membership system, and the co-author of Strong Curves: A Woman’s Guide to Building a Better Butt and Body. She holds a BA from Florida Gulf Coast University and a Master's from The George Washington University. Learn more about Kellie on her website, and connect with her via Instagram.
VIEW BIO
|
READ MORE ARTICLES