The Truth About Alcohol and Breastfeeding 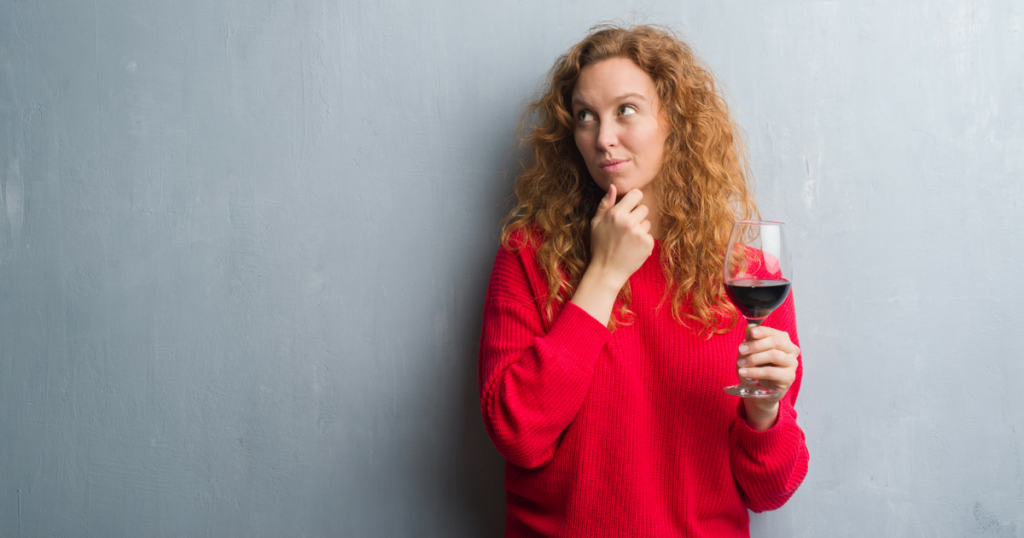 There’s a lot of confusing and conflicting information around mothers drinking alcohol and breastfeeding. Advice ranges from “Don’t drink at all; no amount of alcohol is safe for your baby!” to “Just follow the general guidelines that everyone should follow; breastfeeding isn’t a special consideration at all.” And in between, “Drink moderately and wait two to three hours before you breastfeed.”

These examples can give you an idea of the range of research conclusions:

"As there is no evidence on a safe amount of alcohol in breast milk, alcohol exposure throughout lactation should be avoided, to ensure the welfare of suckling infants.” (Horst et al., 2016) [1] 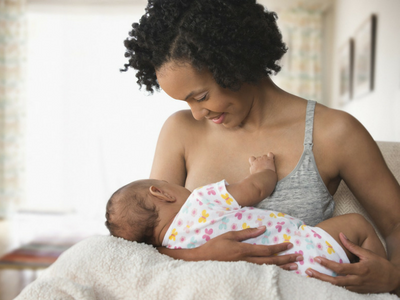 What we do know:

What we don’t know:

Molecularly speaking, alcohol is smaller than other drugs like ibuprofen, which is why it passes into breast milk from the mother’s bloodstream more readily than other drugs.

Alcohol in breast milk is nearly the same as blood alcohol levels, though there is contention as to whether it is a bit more or a bit less. There are studies that show that breast milk contains both a little more and less alcohol compared to blood [3,4].

Pump and dump is a term used when lactating mothers pump or express milk before or after drinking alcohol. The reason for this is twofold: to decrease engorgement, and to decrease alcohol in breast milk.

Regardless of alcohol consumption, pumping or expressing milk to relieve engorgement when mothers can’t breastfeed for an extended period of time is very well established an widely practiced. However, the idea that this leads to less alcohol in the breast milk is less established. 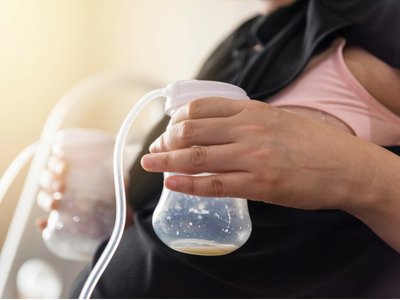 There is research suggesting it changes the pharmacokinetics of alcohol metabolism (how quickly alcohol is metabolized). To clarify, pumping and dumping isn't about getting rid of the alcohol that's in the breast milk while drinking, but about stimulating the breakdown of alcohol [5]. Interestingly, pumping (or feeding) before drinking alcohol seems to work even better than pumping afterwards [5,6].

Alternatively, the American Academy of Pediatrics states that pumping and dumping is not helpful — a position that is based on a 1985 study [3,7].

The scientific evidence so far is that pumping and dumping is likely to increase the rate of alcohol metabolism and definitely relieves discomfort due to engorgement.

The Effect of Alcohol on the Baby

Very few studies have looked at the short-term impact of a mother drinking alcohol on their babies for good reason — it is unethical.

Studies have also found that alcohol changes the flavor of milk, that babies could tell the difference, and that they tended to drink more alcohol-flavored milk [9,10]. However, if the milk actually contained alcohol (vs. just being flavored with alcohol), babies drank less milk during breastfeeding even if they did suck more initially [11,12].

The Adverse Effects of Moderate Drinking

Though limited, there are a few studies on the impact of moderate drinking on breastfed babies.

Decrease in baby’s sleep averaged 22 minutes (56.7 minutes down to 34.5 minutes) with the baby taking in 32 mg of alcohol. This amount is comparable to a 47 kg (103 lb) mother drinking one standard drink and breastfeeding about an hour after drinking. In comparison, a 60 kg or 132 lb woman would drink 18 grams of alcohol or about one drink and a quarter to get to similar levels [11-13].

A recently published study looked Australian mothers who breastfeed their children, and tracked the children’s development over twelve years. The researchers found that the more the mother drank, the more of a decrease in reasoning scores was found when the children were 6-7 years old. However, by the time the children reached 10-11 years of age, any decreases in reasoning scores went away. Furthermore, this data included binge drinking as well as moderate drinking, and drinking levels were assessed by questionnaires that may not be reliable [15].

There is no single answer as to how much alcohol a breastfeeding mother can drink without affecting their baby. This is because so many factors must be taken into consideration including: [1,3,4,6,8]

In its conservative statement, the American Academy of Pediatrics recommends: [7]

"Ingestion of alcoholic beverages should be minimized and limited to an occasional intake but no more than 0.5 g alcohol per kg body weight, which for a 60 kg mother is approximately 2 oz liquor, 8 oz wine, or 2 beers [17]. Nursing should take place 2 hours or longer after the alcohol intake to minimize its concentration in the ingested milk [18]."

This statement is based on an article which further concludes:

"Mothers who choose to drink alcohol while breastfeeding should be aware of the documented effects on nursing infants. Carefully planning a breastfeeding schedule and waiting for complete alcohol clearance from breast milk can ensure that babies are not exposed to any alcohol [18]."

Below is a table the shows how long it takes for breast milk to reach 0 mg of alcohol after drinking one or more drinks depending on the mother’s weight [19]. This table is an estimate as other factors such as mother’s metabolism, genetics, amount of alcohol absorbed, and feeding or pumping right before drinking that would alter these numbers. 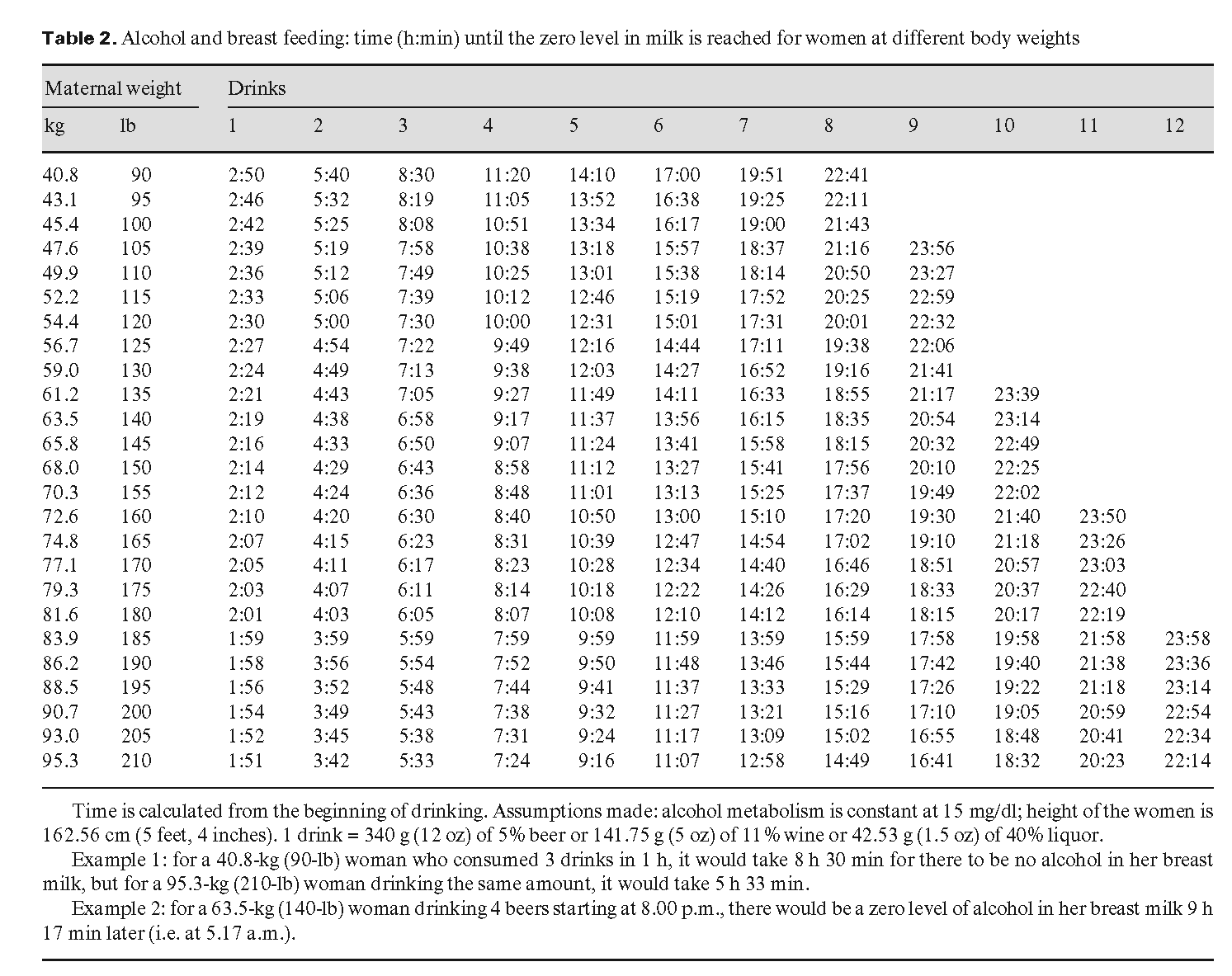 Avoiding exposure of babies to alcohol even in small amounts is the medically recommended position. Breastfeeding mothers can still drink alcohol in moderation, if they wait for the alcohol in their milk to reach zero. 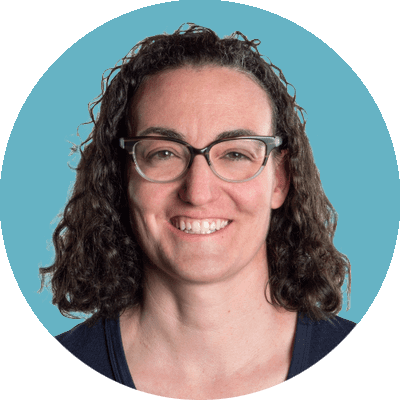 Dr. Helen Kollias holds a PhD in Molecular Biology and a Master’s degree in Exercise Physiology and Biochemistry. She has also held research positions at Johns Hopkins University and the Hospital for Sick Children. Dr. Kollias is a popular contributor to Precision Nutrition’s blog, she enjoys sharing her extensive knowledge, along with a healthy dose of wit and humor. She has played and coached varsity soccer and has been involved in fitness and weight training for almost two decades. She is also the mother of two young and energetic girls.
VIEW BIO
|
READ MORE ARTICLES