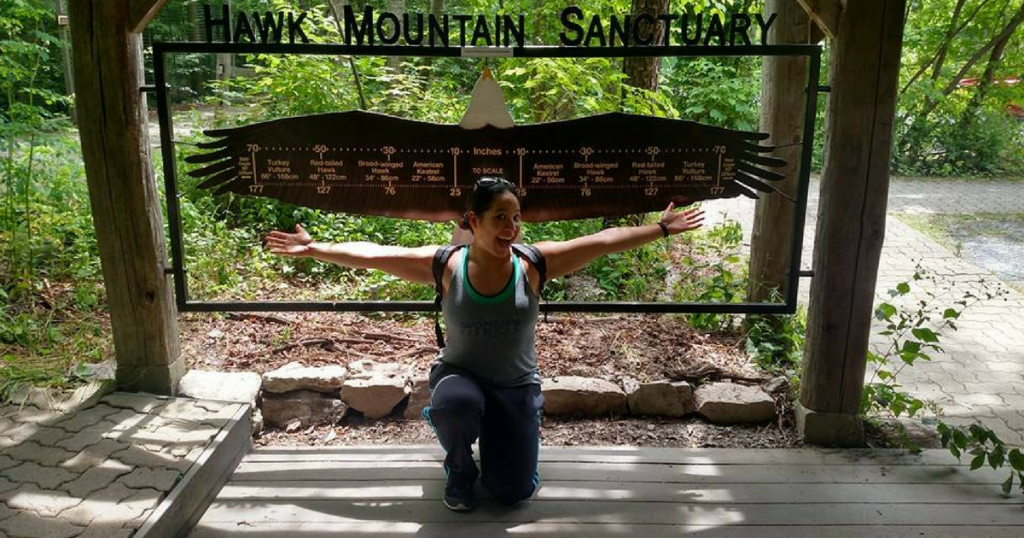 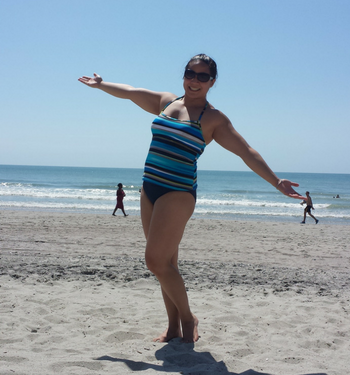 How long have you been strength training, and how did you get started?
I started lifting during sophomore year of college but really only started pursuing heavy lifting five years ago. It was really by accident; I had been picking weights that I thought were “appropriate” for a female but wasn’t really feeling sore afterwards. Then I started lifting with my boyfriend at the time, and he was pushing me to add weights because it looked like I was having too easy of a time. Since I had a spotter for the first time in my life, and he had been strength training longer than I had, I trusted him and let him keep adding weights until he deemed that I was finally struggling just enough.

I was impressed with the weight I could lift and realized that there were guys around me who were struggling more than I was with the same weight. My competitive side kicked in and it’s been a competition with myself to see how far I can go ever since.

What does your typical workout look like?
I’ll usually do a little stretching since I have a desk job and feel tight by the end of the workday. Then I’ll do a dynamic warm-up from either Modern Woman’s Guide to Strength Training or Unapologetically Powerful. After warming up, I’ll follow the program from Unapologetically Powerful for the day if I have the time for a longer workout; otherwise, I will do three to four sets of three to five compound exercises (either full-body or for a certain area, depending on what the rest of my week looks like) at a relatively heavy weight to get the most out of the limited time I have to work out.

Most memorable PR:
I have two memorable PRs that I can’t really decide between. The first is the deadlift PR that I hit during my last meet. There was another woman in my weight class at roughly the same body weight as me who had failed in her second attempt at weight five kilograms above my planned third attempt. We were close in score, so I decided to increase my third attempt by 5 kilograms to match hers. It was a stretch but I had nailed my second attempt and there was a chance for me to overcome her score if I got my third attempt. I wasn’t sure I could do it and it was definitely a struggle but the cheering from the crowd and the MC helped me get that bar up. It was amazing! 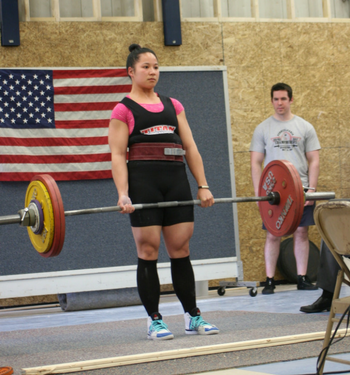 The second memorable PR was the first time I benched after recovering from a back injury. I hadn’t lifted in months but went to a workshop that Jen Sinkler put together. While I sat out of an exercise the group was doing because I couldn’t move so quickly with my back still not being at 100 percent, I decided to see if I could still bench my latest PR, just for sh*ts and giggles. When that one felt like a breeze, I threw on 10 more pounds and hit a new PR!

Do you prefer to train alone or with others? Why?
I can go either way but I prefer to train with at least one other person since the gym is usually one of my few times to socialize and because I’ll randomly want to try maxing out and need a spotter.

Top 5 songs on your training playlist:
I usually listen to the latin pop/dance radio on Pandora when I’m training. When I’m trying to hit a new one-rep max, I’ll put on visual kei like the Gazette or 12012.

Most embarrassing gym moment:
I was attempting a one-rep max bench press without a spotter. I thought I felt pretty good that day but when that bar was on its way down, this long “uhhhhhhh” crescendoed in my head as I realized the bar was a lot heavier than I thought it would be. It was probably the slowest descent and pin-down ever. If anyone was watching, they probably would’ve noticed my eyes getting bigger and bigger as the bar came down. I had made sure to set the safety bars properly so that I wouldn’t get hurt but I didn’t give myself enough room to have clearance between the bars and my boobs. I got to spend the next few minutes wriggling and trying to roll the bar down the length of my body so I could get out from underneath.

Most memorable compliment you’ve received lately:
“You’re perfect for being a trainer. You’re charismatic and fun to be around!” (The comment I got when I was “voluntold” to conduct the training on quality for the 400-some new employees that were starting at the beginning of the year.)

Most recent compliment you gave someone else:
I’m a huge fan of fashion color in hair (pink, teal, green, blue, etc) so I always compliment someone when I see they have some fashion color in their hair, especially older women, because it takes some guts to go against what’s considered “normal” for the time. 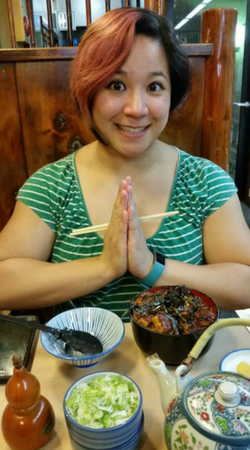 Favorite meal:
There is no such thing — I love most, if not all, food.

Favorite way to treat yourself:
A nice massage.

What inspires and motivates you?
Watching other women lift heavy.

What do you do?
I’m a project quality engineer for Mack Trucks. I am responsible for quality management of new product development projects for both the Mack brand and the Volvo Trucks brand, as well as industrial projects at the plant where I work. This usually involves conducting failure mode analyses, creating control plans, and going to the production lines to support builds. Prior to this, I had a short stint as a process engineer at a chemical plant which was preceded by approximately five years as a product engineer in a cryogenics business.

What else do you do?
I am going to grad school part-time for a dual masters in engineering management and mechanical engineering with a minor in project management. I also just got a puppy so in any spare time I have outside of work and school, I enjoy training and playing with my puppy.

For what are you most grateful?
I am the most grateful for my parents who gave me the life I have because of their hard work after immigrating to the U.S. when they were in their early 20s. My mom repeated high school so that she could learn English and excel in college, and my dad has worked tirelessly supporting our family (both nuclear and extended).

Of what life accomplishment do you feel most proud?
Becoming comfortable in my skin by learning to love my muscles and my strength.

Tell us about a time when you overcame fear or self-doubt.
I was recently offered the opportunity to act as project manager for an industrial project at work, to help prepare my department for the upcoming production rate increase. It was the first endeavor for which I was a project manager; I had only ever learned theory up until then. The project was, and still is, a bit of a mess because of various factors. I’m still trying to do my best though and produce as good an outcome as I possibly can given the limitations.

How has lifting weights changed your life?

Lifting weights has made me more confident in myself and turned me into a more assertive person.

Before I found powerlifting, I did not have a lot of self-love and would often go into these “pits of despair” about how my body did not match and could never become like the bodies I saw in magazines and on TV. I had an awful relationship with food, went on diets that demanded extremely low caloric intake, and did cardio for hours after I binged. Now, I have a much better relationship with food and have learned that I don’t need to have a super restricted diet in order to lose weight. In fact, sometimes I can’t even finish everything on my meal plan for a given day. I glorify in my muscles and have no problems showing them off to or sharing my weight with any of my guy friends or any of the men at work.

What’s the coolest “side effect” you’ve experienced from strength training?
I’ve become more dense — my body weight is pretty heavy but I don’t look it. I also get to eat more and still lose weight.

What do you want to say to other women who might be nervous or hesitant about strength training?

Strength training can have an enormously positive effect on your perception of yourself when you realize the amazing things your body can actually do in contrast to what society tells us it can do.

Despite being one of few women in an engineering field — especially in my current industry — and being used to having very little expected of me because I am a female, this was the one aspect of my life where I felt that I had to follow societal norms. It dragged me down and made me hate myself. Now I am liberated, strong, and confident.

I also hear comments from women who are hesitant because they’re afraid of bulking up. Being able to bulk up is highly dependent on genetics and diet. Even if you do bulk up, like I do, there is nothing wrong with it and it’s something to be extremely proud of. Many people try their hardest to bulk up and can’t, like my ex-boyfriend and many of my guy friends who are envious of how easily my strength returns after being out of the gym for months, as well as how easily I build muscle. It’s a superpower and looks really awesome in strapless dresses! 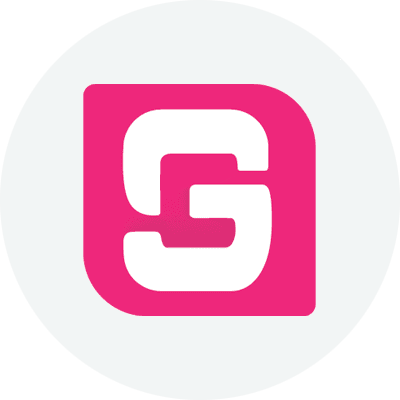